Hoe kan dat nou zult u misschien denken, hogere efficiëntie en toch geen economische groei? Een artikel uit het tijdschrift Forbes geeft een kleine inkijk in de dieperliggende werking van de economie: “The gap between the rich and poor has risen in the United States over the past few years. This seems to have lowered overall consumer confidence and acted as a drag on the economy. A continued bifurcation of income distribution could have significant negative economic consequences.”

“In Germany ........... The availability of cheap guest-workers in German factories slowed the adoption of new labour-saving technology. As the saying went at the time: ”Japan is getting robots while Germany gets Turks.“
((The Economist (October 8, 2005 )))

-58-  Lyndon:
Interesting thread, however I think that some mention should be made of the attitudes taken by those who employ Polish workers in Amsterdam, in Nederland - in het heel Europa.

These people are a proud, well educated and hard working nation. Whilst Western Europeans have sat on their ever expanding fat arses, looking to live the life of pleasure, they have needed others to do the work for them - more than often - taking advantage of someone else's misery to their own benefit - or indeed - profit.
[I am sorry to say but NL must rank very highly in this form of economic abuse.]

What happens to foreigners in this country, is a direct and extremely clear indication as to how those, Dutch and foreigner alike, treat the Polish people. We can justify our guilt by saying that this is “Capitalism” in action, and then gloat at the easy street life that most people really live in comparison to a few billion others.

Goedkoop can be duurkoop; maar dit soort idealisme zit wel vast in NL'ers uitzicht op het wereld. If they like it or not.

This is no socialist diatribe, however when will we realise that cycles of economic and social abuse of using cheap labour and creating underclasses, does not help society. Think of all the money that goes in to fighting poverty which is totally without warrant. National xenophobia about job losses and crime are quite pathetic at the best of times, however cloud the issue of migrant labour with sensationalist claptrap.

As citizens of the EU and as human beings, we should respect the Human and Economic Rights of people to earn a fair wage for a fair amount of work or effort, to receive some benefits, as they contribute to the wellbeing of society for everyone.

Last but not least, I think that it should be mentioned that once Communism collapsed, the rush to fill the gap left in socio-economic order was one that was driven by economic greed and not the wish to help a former Soviet state - Poland - is a good example of this. Crippled by Communist corruption, the new order that sprang out of a great deal of misery, somehow only made minor improvements. Real change has yet to happen and by and large the same corrupt politicians and their parties, still hold sway in Poland, which has to make you wonder about what the member states of the EU really want from Poland. The massive marginalisation between those who have and those who do not have increases as each deal seeking investor snoops around, ready to buy someone else's heritage for their own pocket at bargain prices.

I think that we need to open up some discussion on what our intentions are for the new member states as citizens of our democracies and not by allowing politicians and corporations to carve everything up to their benefit and lie about the so called “trickle down effect” of Capitalism. It's total garbage. If we're going to buy cheap, then we have an ethical and moral duty to ensure that we are not causing more harm than good. By helping others, we can help ourselves, and still apply the basics of profit and private property. All I have seen recently, having returned from Poland, are the plain bare facts.
5 Mei 2006 - 13.48 uur 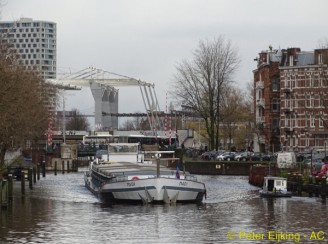